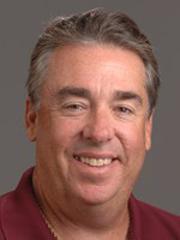 Why Honored: Lauffer has been head coach of the Buffs mens soccer team for over 25 years, leading them to over 300 wins.

In 1991, Lauffer started the men's Division II soccer program at WTAMU in less than three months. In that first season, the Buffs went 10-8-2.

Lauffer started the Lady Buffs soccer program in 1994, and led them to a 12-4-0 finish. That first season, they won the Lone Star Conference regular season title.